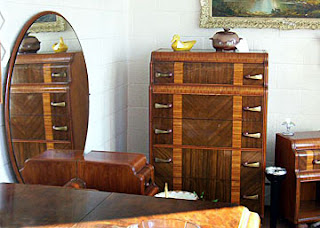 QUESTION: My parents bought a bedroom set when they got married. They kept it all their married life. Now that they’ve both passed on, it’s come to me. It’s of a very unusual design with lines that look similar to Art Deco, with curves and veneer decoration. Can you tell me what this is?

ANSWER: The photos you sent identify your bedroom set as what was commonly referred to as “waterfall” furniture. Because it was relatively inexpensive, it became the style of choice for middle class newlyweds. In 1930, a set like this would have cost between $19.95 and $39.95. More luxurious sets sold for slightly more.

In the late 19th century, most American furniture makers produced pieces from solid wood. This continued until after World War I when the conservation movement, led by Teddy Roosevelt, gained prominence and the invention of lumber core plywood signaled the end of this practice. Plywood consisted of four layers of wood, two on each side, glued to a core of inexpensive lumber. Makers glued the layers at right angles to each other for added strength. 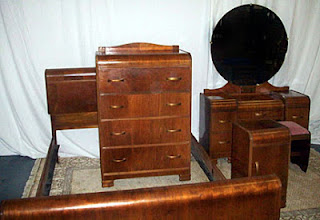 Before 1930, manufacturers prided themselves in producing pieces with sometimes up to 11 layers of wood, especially for curved door panels. Working with curved surfaces was up to this time a very painstaking and expensive process.

But then came the Great Depression. With so many people struggling just to get by, furniture makers had to adapt. Families continued to grow and there became a demand for furniture from the newlywed market. Most new couples couldn’t afford to guy their own house, so all they had was a room in usually the bride’s parents house. The "Bedroom Suite" was probably the only thing that they owned, resulting in inordinate sentimental attachment to the furniture and a reluctance to change even when finances improved.

Because of the furniture’s free-form and curvy lines, people called it “waterfall” furniture. There are all types of pieces, including chairs, desks, end tables, clothes chests. Waterfall furniture doesn’t have a  frame. It relies on the strength of the molded plywood to give it structure, enabling makers to also give it  curved or rounded horizontal edges. Manufacturers employed an unusual veneer design called bookmatching on the fronts of pieces and ran the grain of the veneer from front to back on the top surfaces. Drawers featured Bakelite handles. 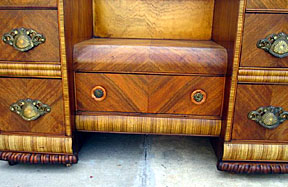 The inspiration for waterfall furniture came from handmade furniture emanating from the modernist movements in France, Austria and Germany, known as Art Moderne. Makers copied the designs of the ultra-exclusive French firm of Sue et Mare. Early examples, designed to appeal to broad audiences. mix Victorian motifs with modernist themes,  .

The style is most frequently seen in Bedroom Suites, although manufacturers produced dining sets and even billiard tables. A basic bedroom set included a bed, vanity and bench, and chest of drawers. More deluxe, thus more expensive, sets included nightstands, a dresser, a cedar chest, and a armoire/chifferobe. A full dining room set included a table with removable leaves big enough to seat six people, five chairs, china cabinet, and buffet, all of which sold for $103.50.

Today, a complete basic bedroom suite sells for $800-$900 in reasonable condition. The hardest pieces to find are nightstands and vanity benches. Cedar chests go for $400 and up.
Posted by Bob Brooke at 12:38 PM

"Most new couples couldn’t afford to guy their own house" has a typo. Nice piece, though.

Thank you for the info! My daughter just bought a dresser and I shared your info. She is very excited, it's for her nursery!

Damian Corporate Expert Team working for capable commercial furniture manufacturers will give you all that you require to differentiate your property and raise your guest's experience...!!!

Thanks for the information. This helped me figure out that the buffet I bought for $50 at a yard sale is a waterfall piece - plywood with bookmatched veneer, a curved, molded horizontal edge, and ornate brass and bakelite hardware. Guess its not worth much, but it is useful and attractive in my dining room.

a desk chair, and chest (new furniture for at least 3 different rooms in my home). I am getting ready to order a few additional pieces for my study and my first stop will be Best Prices for Furniture. Demir Leather

Love all your stuff! Thanks for all your hard work
Denver Furniture Stores

I live in Southern Calif. Art Deco anything can be very expensive. In 1981 I paid $2200 for a Gorgeous Waterfall bedroom set all trimmed in blue mirror. I have never been able to find another one like it. I am in the process of purchasing another one similar from out of state for under $1000 plus shipping because her the bedroom set (its in excellent condition) would cost anywhere from $2500 to $4500. Each piece averageing $850 to $1000 so I think the value lies in what part of the country you live in. Art Deco Shops in Hollywood near me, have sets like this for up to $6200.

Your website consists of a lot additional info that provides much more understanding and much more suggestions concerning the subjects you've provided inside your website.

Really Awesome………very nice post. You are Expert in your profession. It's a very interesting in a post. I appreciate you keep do a posting..Fitted Wardrobes

I enjoyed reading this article. PLease continue publishing helpful topics like this. Regards, from beddingstock

This is just amazing to see this newlywed furniture. We also offer some of the best furniture for your home. We also provide free shipping anywhere in Canada.

Dear anon in Southern Cali:
I'm not even sure that you will see this since you posted as anon but I'm gonna give it a shot. Anyway please e-mail me asap at bethsheree1979@gmail.com as I have something that may be of interest to you. I'm fairly certain the Waterfall bedroom set we are about to list has the "blue mirroring" as you called it. Thank you.

Clued-up publish! Your own recognized knowledge is excellent. Many thanks with regard to maintain me personally inform. To learn more I'll be in contact.
Fabric Bed Frame ireland

This is just amazing to see this newlywed furniture. We also offer some of the best furniture for your office Check our latest Office Workstation.

Wow…outstanding service and products to meet our office needs. I Love all and the colors you choose are perfect. I want this furniture for my new house. Thanks a lot for sharing
Dressing Table Manufacturers In Chennai

Wow…outstanding service and products to meet our office needs. I Love all and the colors you choose are perfect. I want this furniture for my new house. Thanks a lot for sharing
Dressing Table Manufacturers In Chennai

I have read your Article. It's inspiring and I like it.
I have Collection of Art Deco Furniture you can give look to them.

How can I tell what year my water fall furniture was made? I have everything but the bed. Chest of drawers, vainty with original stool, chiffrobe and night stand .I would live to find out the year it's from.

Such an amazing blog and it is very helpful.

I have two bedroom sets and a dining set.
On bedroom set very detailed and has nice spiral decoration on the corners. It includes the bed, huge chest of draws, dressing mirror with drawers and bench, tall chest of drawers.
I will be selling all plus more soon.
Western Virginia. Best to contact me at rrfeury@yahoo.com

Customized women hoodies online A very awesome blog post. We are really grateful for your blog post. You will find a lot of approaches after visiting your post.

Bedroom and living room furniture in london A very awesome blog post. We are really grateful for your blog post. You will find a lot of approaches after visiting your post.