The View is Blue 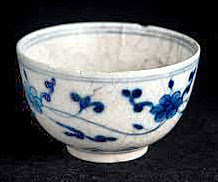 QUESTION: I’ve always liked the look of the Blue Willow ware dishes that my mom used to bring out for holiday dinners. Even though the scenes on them were all the same, I was still intrigued by the use of blue on a white background. When I became an adult, I started to look at other pieces of Chinese blue and white porcelain. Then one day while browsing a local antique show, I spotted a tea bowl and saucer, decorated in underglaze blue with two cartoonish Chinese fishermen unraveling their nets. At first, I thought the set was Chinese, but the dealer said it was made by Meissen in Germany in the 18th century. The set was way out of my price range, but I took a photo of it with my smartphone and decided I had to learn more. While I’ve learned a bit about these early handpainted porcelain wares, I’d like to know more. Can you help me?

ANSWER: While most people associate Meissen with 19th-century porcelain figurines, they were the first to produce hard-paste porcelain in Europe at the royal factory at Meissen, near Dresden, in 1710. 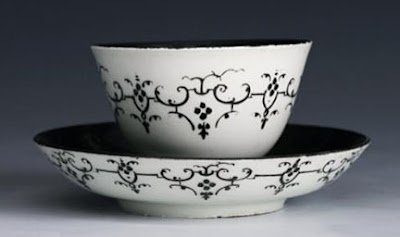 In 1717, King August the Strong of Dresden Saxony, announced a reward of 1,000 thalers to the first person who could come up with blue porcelain painting similar to that  of the Chinese imports. August called the white porcelain white gold. August had previously provided the funds to set up the royal factory in Meissen.

Johann Friedrich Boettger produced the first successful examples of European porcelain. He sent the King a letter on March 28, 1709, promising "porcelain with the finest glaze and all its attendant painting and decoration equal to that of the East Indian," by which he meant the Chinese. But despite his claims of having produced some preliminary pieces of blue underglaze painted porcelain, he was unsuccessful. 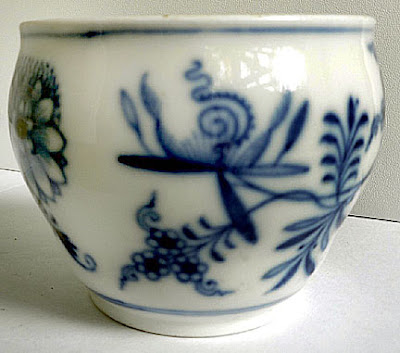 However, the sum of 1,000 thalers attracted many craftsmen, as well as charlatans. Notorious among them were a father and son team called the Mehlhorns, who in 1719 bragged to the local newspaper about possessing the secret of blue painting. However, they never produced consistent results. The real credit for developing the underglaze blue color goes to David Koehler and Samuel Stoeltzel, who accomplished it between 1721 and 1722. And although the King acknowledged their success, they never saw the 1,000 thalers.

One of the most talented early blue painters was Johann Caspar Ripp. He was already an accomplished faience painter trained in Delft when Johann Gregarious Hoeroldt brought him to Meissen late in 1720. But his creativity and independence made Hoeroldt jealous, so he fired him in 1723. 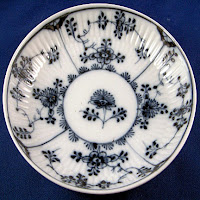 Cobalt blue decoration began to be manufactured on an industrial scale in 1789, when Meissen began producing its most popular underglaze blue pattern—Blue Onion.

While the popularity of the Blue Onion pattern exploded after1860, it was not the most common underglaze blue decoration during the 18th century. The earliest Meissen pieces depict imaginary Chinese scenes known as “chinoiserie” and Kakiemon-style decorations inspired by the Japanese Arita wares. As a set pattern, the most common one was actually the Strawflower decoration, later adapted and made world-famous by the Royal Copenhagen Factory. 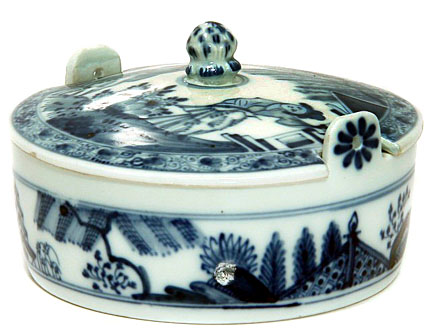 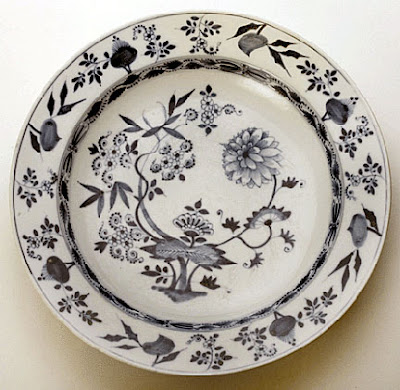 Some of the rarest and most stunning underglaze blue wares were those that combined blue and overglaze polychrome painting in a single composition. Artists painted the background scenery in cobalt blue and the artist, visualizing the final painting, reserved areas prior to firing to which he would later apply an overglaze polychrome painting to complete the scene. Because artists handpainted each piece with unique designs, no two pieces are completely alike.

In the 19th century, Meissen standardized the underglaze decoration, applying it with stencils to outline the pattern, a job often left to apprentices.

Therefore, single pieces from the mid-18th century today sell for high prices, their value coming more from their rarity and age. They represent a time in the history of European porcelain when the blue color was just being brought under control.

To read more articles on antiques, please visit the Antiques Articles section of my Web site.  And to stay up to the minute on antiques and collectibles, please join the over 30,000 readers by following my free online magazine, #TheAntiquesAlmanac. Learn more about "The Ancients" in the 2021 Spring Edition, online now. And to read daily posts about unique objects from the past and their histories, like the #Antiques and More Collection on Facebook.

Posted by Bob Brooke at 1:30 PM No comments: