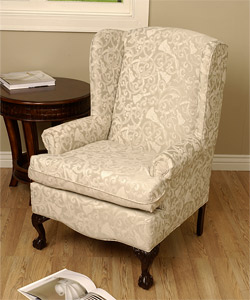 QUESTION: Recently I purchased an old wingback chair at a local antique shop. It seems very old to me since it has ball and claw feet, plus it’s upholstery looks good but older in style, leading me to believe it had been done long ago. But I’m puzzled about the springs supporting the upper pillow. Perhaps they were also added at a later time. Can you tell me more about this type of chair and how old this one might be?

ANSWER: Unfortunately, your wing chair isn’t as old as you think. It dates from the Great Depression of the 1930s and would be considered a Colonial Revival piece. What led you to believe the chair was older were its ball and claw feet, made popular by Thomas Chippendale in the mid-18th century in England.

The Chippendale style of furniture remained popular until the end of the 18th century when interest in it disappeared until the Centennial Exposition in Philadelphia in 1876. The fair inspired furniture makers to re-create the styles of the American Colonial Period until all such furniture became known as Colonial Revival or just “period” furniture. Chippendale created chair designs for comfort, unlike the still, but stylish designs of Federal ones. His wingback chair offered the ultimate in comfort.

But where did the idea for a chair with wings originate? As early as the 17th century, people living in cold weather areas gathered by their fireplaces on crude wooden benches to keep warm. As the century progressed cabinetmakers added high backs with small wings to these benches. While they were functional, they were far from comfortable.

Furniture historians believe they originally intended the wings to prevent drafts from reaching the upper body of those who sat in these chairs. The chairs also prevented the immense heat a roaring fireplace fire from affecting the makeup of ladies who might be sitting too close to it. Makeup then was clay-based and tended to run when heated. 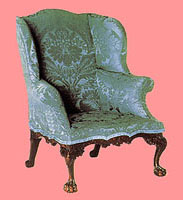 Unlike other chairs, wingbacks offered a greater level of comfort and beauty. With the onset of the 18-century, chairmakers began incorporating upholstery into their wingbacks. Chippendale molded the wingback design by adding elegant frames such as oversized wings and scrolling arms to offset the upholstery. However, most of his designs did not have a pillow seat. Instead, the upholstery was stretched over the springs and small amount of padding. The “knees” of the chair were also chunkier and lower to the ground than those of Sheraton and Hepplewhite.

Also called fireside chairs, wingbacks allowed a person sitting by the fireside to catch the heat while eliminating cold drafts from creeping around their back or sides, so chairmakers developed a new kind of chair known as the “Sleeping Chayre.” Not only did this chair have wings, enabling the sitter to stay warm, it’s back could also rachet to different angles for sleeping.

This led to an unusual use in the 18th century. Respiratory diseases were rampant back then, and people commonly believed that it was better for the sick person to sit up to prevent fluid from accumulating in their lungs. So wingback chairs eventually found a home by the fireplace in American Colonial bedrooms.

It was often common to find two of these chairs—one for the master and one for the mistress of the house—facing a small round table by the fireplace in the master bedroom of the house. Colonial couples often took their supper, known back then as “high tea,” in the warmth and comfort of their bedroom rather than in the drafty dining room downstairs.

Towards the 19-century, chairmakers generously stuffed wingbacks with horsehair for an added dose of padding. Covered in velvet or needlework to imitate contemporary French styles, they sported bright patterns and ornate fabric embellishments.