The Age of Innocence - Part 2 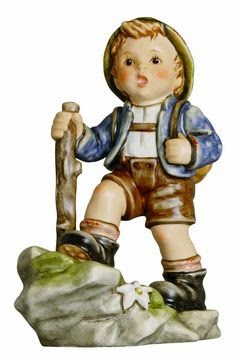 QUESTION: My mother collected Hummel figurines for a long time. Now I have her collection. Frankly, I don’t know anything about these little figures of children, other than what little I’ve read or heard. Can you give me some background about my Hummels? I’d like to continue collecting them, but have no idea where to start.

ANSWER: After delving into the life of Sister Maria Innocentia (a.k.a. Berta Hummel), the creator of the original drawings of children made into Hummel figurines (see Part 1 from last week),  it’s only natural to take a look at the other side of the story—their manufacture and distribution.

The Goebel Company., located in the southern part of Germany near the town of Oeslau-Rödental, just outside Coburg,, was the sole producer of Hummel figurines. Franz Detleff Goebel originally built a factory to make writing slates, blackboards, and marbles in 1871 beneath Coburg Castile in Bavaria. In 1878, the Duke of Coburg Castle granted permission for the him to build the first kiln to produce porcelain dinnerware, kitchen items, and beer steins, as well as bisque doll heads. He invited his son, William, to join him in running the company and changed the name to the F. & W. Goebel Company. The firm set out to produce luxury porcelain, including small sculptures in the Meissen Rococo style. 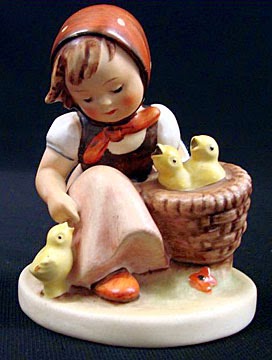 By 1909, Franz and William began seeing an opportunity to export their product. In 1911, F. W. Goebel Co. introduced its first line of figurines and began an international marketing campaign. As the company continued to grow, so did the lines of products the company produced. The international success of Goebel’s figurines caused the Goebel family to introduce the concept that figurines could be associated with emotion and not just be decorative objects. The firm became the first to market their artists as aggressively as they did their products. After several years of porcelain production, Franz's son William expanded the Goebel product line and changed the company name to W. Goebel Porzellanfabrik.

William believed that there were untapped opportunities in the United States, so in 1911, he sent his 16-year-old son, Max-Louis, to America, where he went to school and developed a passion for art like his father. When he returned to Germany, his father put him in charge of the business and the younger Goebel set about taking the company into the 20th century.. 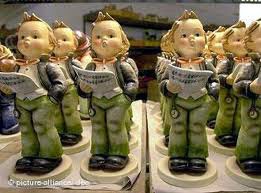 Max-Louis wanted to capture a larger market share, so, in turn, he sent his young son, Franz, to the United States in the early 1920s to study the American ceramic after market. It was a time of prosperity for Americans but a dismal time back home in Germany with political anarchy and runaway inflation. Franz knew that it was essential that his father expand the export markets of the W. Goebel Company in order to remain in business.

When Max-Louis Goebel died in 1929, it was up to Franz, his mother Freida Goebel, and his uncle Dr.Eugene Stocke to carry on the business. Having spent so much time in America, Franz instinctively knew that it was the greatest market in the world. He decided to develop a series of affordable ceramic figurines and selected children as the subject. He believed they would appeal to a broad audience. As the 1930s dawned, Franz  thought that in a world of political turmoil, customers would respond to a product that depicted the gentle innocence of childhood. 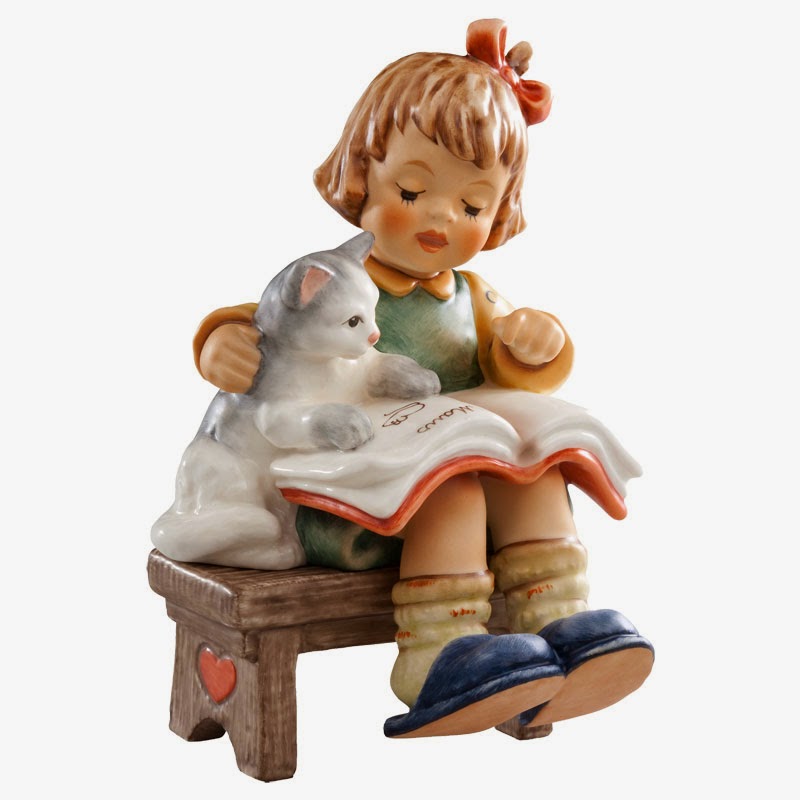 In 1933 he started his search for the art and artist whose work could be transformed into three-dimensional figures of children. While in Munich to see how his products were doing during the Christmas season, he stopped at a small religious art shop. On the counter stood a display of art cards by Sister Maria Innocentia. He was immediately drawn to these wonderful sketches of innocent children and enthusiastically took a few cards back with him to Coburg. He discussed the possibility of transforming the artwork of Sister Maria into ceramic figures with his two top modelers, Arthur Moller and Reinhold Unger. They thought it possible, but also thought it would be one of the most challenging and expensive projects ever undertaken by the company. Franz hired artists to “interpret” Sister Maria’s drawings by making them into three dimensional figurines.

He acquired rights to turn her drawings into figurines, producing the first line in 1935. W. Goebel was one of many mid-size porcelain firms competing in the U.S. market and Franz´s knack for novelty marketing caused the figurines to become popular among German immigrants on the East Coast. 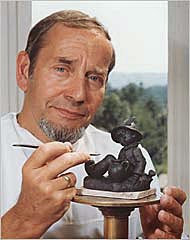 Franz contacted Sister Maria at the Convent of Siessen and showed her clay models based on her drawings. She and the Convent of Siessen granted sole rights to the his company to create ceramic figures based on her original artwork. Sister Maria personally approved the sculpting and painting of each porcelain piece. The Convent would receive all royalties derived from the sales. Geobel determined that earthenware, pioneered by the firm in the 1920s, was the best medium for the new collectibles product line.

The first marketing challenge for the newly manufactured Hummel figurines came at the Leipzig Trade Fair held in March 1935. With the enormous risk the company had undertaken in the development and first production of the Hummel figurines, success at Leipzig was very important. Fortunately, the American buyers liked the figures and placed a number of orders. By the end of 1935, the W. Goebel Company had released several more figurines, expanding the line to 46. Sales of the figures on the international market during the 1935 Christmas season were brisk. 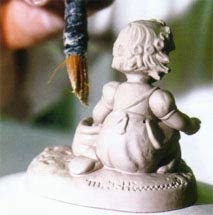 After World War II, the United States Government gave W. Goebel Company permission to resume production and export of Hummel figures. Production began slowly as many of the master molds and models had been lost or destroyed during the war. During the re-modeling process, Goebel artists made modifications that resulted in slight changes in the design of the figurines.

The popularity of Hummel figurines grew as American soldiers stationed in West Germany began sending the figurines home as gifts. Nostalgia associated with the figurines and the U.S. soldiers buying them led to Hummel figurines becoming a popular collector's item. Popularity increased even more when the U.S. Army PX system began selling the Hummels. After Sister Maria’s untimely death at 37 in 1946, Franz Goebel carried on her artistic legacy by developing new Hummel pieces. A vibrant speculator market in Hummel figurines had developed by the 1970s when Hummel figurines skyrocketed in price. 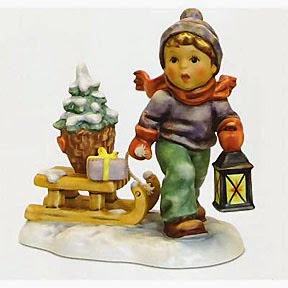 Unfortunately, as with so many popular collectibles, there are lots of copies and fakes. To determine if a figurine is a genuine Hummel piece, you should look for the definitive mark of Sister M. I. Hummel incised on the bottom of every authentic piece. Sister Maria requested that her personal stamp of approval would appear on every piece and under the direction of the members of the convent. All Hummels have a mold number incised on the bottom of each figurine at the time of manufacture. Another definitive identifying mark is the official Goebel trademark on the underside of each figurine.

In January, 2009 Jörg Köster, managing partner of the Höchster Porzellan Fabrik Company, together with private investors took over the manufacture of Hummel figurines. Under the company Manufaktur Rödental, Hummel figurines are now being produced in Franz Detleff Goebel’s original building in Oelslau-Rödental near Coburg.

eToro is the ultimate forex broker for novice and professional traders.