Let the Star Wars Force be With You

QUESTION: My son was a big Star Wars fan when he was younger. He had just about every Star Wars action figure that came out—at least of the smaller ones. But now he’s grown and has his own family, and I seem to be left as the caretaker of his collection. I’d really like to know if these figures are worth keeping. Can you tell me something about them and if they’re collectible now or were they just a fad like Beany Babies? ANSWER: Even though the first Star Wars movie premiered 40 years ago, the action figures that came out as a result of it and other Star Wars films are still highly collectible. Whether or not they’re still in their original packages will tell how much they may be worth.  If they’re still in unopened packages, then you have something. If not, maybe not.

In May 1977 "Star Wars: A New Hope" exploded across the big screen in a symphony of sound and light unlike anything audiences had ever seen. Fans went crazy over the film, some seeing it hundreds of times, and sci-fi films haven’t been the same since. Star Wars was the first movie franchise which created a voracious demand for film-related products. Fans clamored for tangible souvenirs of the new universe they were coming to know and love. Director George Lucas and film industry leaders were all taken by surprise.

While the variety and forms of Star Wars items are almost as numerous as the stars themselves, the most popular objects of Star Wars collectors’ desires are the toys. Furthermore, among the toys, the  most sought after are the 3 3/4-inch action figures. Kenner Products is responsible for the most of the Star Wars toys that are on the collectibles market today. The firm obtained the original license to manufacture toys, games, puzzles and a few books prior the release of the first film in 1977. In time, the resultant outpouring of products from the Kenner factories far outstripped Lucas’ expectations. In fact, all he expected from his merchandising rights were a few posters and T-shirts with which to lure more children to his film. At a base price of just $2 or less, not only kids but adults quickly bought up the stock of figures. And over the years came back for more in a variety of re-incarnations.

Following Kenner, other toy manufacturers joined in on Stars Wars’ success. Chief among was Galoob, a company determined to "out-small" Kenner with its Star Wars Micro Machines. Play sets and spaceships were this company's main products. Action figures by Galoob were about the size of the smaller accessories that accompanied Kenner's figures. Galoob sold these tiny action men and women as part of  play sets. No other company ever came close to the Star Wars toy output of these two firms.

By definition, action figures are molded of plastic and designed for play. While they’ve varied in size over the years, the original ones were only a little over three inches high.  Kenner made these figures to have five points of articulation—at the neck, shoulders, and hips. They also had their clothing molded as part of the body, while some of the larger figures have removable clothing. 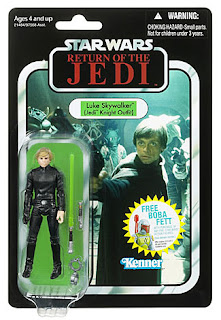 Toy companies package action figures of different sizes differently. The 12-inch and 8-inch figures generally are packaged and sold in boxes. The 3 3/4-inch-tall figures most often appear on store shelves sealed against a decorated cardboard backing within a plastic bubble commonly referred to as a blister. The package for the 3 3/4 inch figure is thus referred to as a blister pack.

Kenner designed its 3 3/4-inch high Star Wars figures for use with play sets, spaceships, and other accessories. But their 12-inch figures of Luke Skywalker, Darth Vader and such were too large to be equipped with play sets. But one thing that action figures have in common is that the come with a array of small accessories that tend to disappear quickly once a child removes the figure from its packaging.

Then Kenner’s line seemed to die out for a while. In 1995, the firm re-introduced its Star Wars figures with a new design and/or a repainting that appealed to both kids and adults. But one thing to be aware of is that the newer figures tend to come and go. From time to time, Kenner would play with the mix of figures on the market at any one time. It would remove some of the older models and replace them with newer ones. 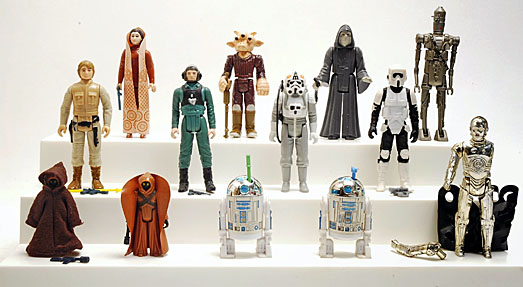 Kenner first released its line of 12-inch figures in the late 1970s, sticking mostly to the film’s main characters. But these 12-inch figures didn’t compete well with Kenner’s 3 3/4-inch ones and the company stopped making them. But its smaller figures live on.

To read more articles on antiques, please visit my Web site.  And to stay up to the minute on antiques and collectibles, please join the other 17,000 readers by following my free online magazine, #TheAntiquesAlmanac.
Posted by Bob Brooke at 11:10 AM